For those of you who are watching the show on DVD, the season 2 part 1 DVD will be out August 16th. Here's a peak of what the package will look like: 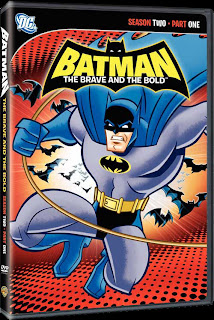 Season One parts 1 and 2 are already available on Amazon if you don't already have them.

End of shameless plug.
Posted by Bill Dunn at 5:50 PM No comments:

B:TB&tB episode 16, a photo by William Joseph Dunn on Flickr.

B:TB&tB episode 16 "Night of the Huntress" Directed by Ben Jones.

This is the interior of the Bat-Bot. Episode 16 featured it's first appearance on Brave and Bold.

"Batman: The Brave and the Bold" ™Warner Bros. Animation.

B:TB&tB episode 15, a photo by William Joseph Dunn on Flickr.

B:TB&tB episode 15 "Trials of the Demon!" Directed by Micheal Chang.

In this episode we have Batman in 19th century London teaming up with the Demon Etrigan and Sherlock Holmes to battle Jim Craddock, the future Gentleman Ghost. We also get an appearance of Batman in the "Gotham by Gaslight" costume.


"Batman: The Brave and the Bold" ™Warner Bros. Animation.

As soon as we started this episode, the Hammer horror films of the 60's and 70's were mentioned as a possible source of inspiration. I looked at a few of those as well as Francis Ford Coppola's 1992 film "Dracula". What I wanted to do with this episode is to start off with a pallet that would give the feeling of a cold damp London and slowly bring in more color as the episode progressed. As you can see in the interior of the windmill background, I added an emerald green moon lit sky as the rain clouds part. I wanted to have a drastic shift in the color when we end up in the underworld. Around that time, I was watching the "Coffin Joe" movies "At Midnight I'll Take Your Soul" and "This Night I Will Possess Your Corpse". "This Night I Will Possess Your Corpse" is mostly in black and white, but right in the middle of the film, the Coffin Joe character ends up in Hades and all of a sudden the film is in vibrant color. That's kind of what I was going for here. Looking at these backgrounds now, I kind of wish I went a little more cold and monochromatic in the London backgrounds so the underworld backgrounds would "pop" even more when you got to that scene. Oh well, live and learn.

"Batman: The Brave and the Bold" ™Warner Bros. Animation.
Posted by Bill Dunn at 9:16 PM No comments:

The second half of season one opens with an uncharacteristically melancholy Aquaman. I wanted to have the colors in the scene to reflect that, so this is the pallet I decided on.

"Batman: The Brave and the Bold" ™Warner Bros. Animation.
Posted by Bill Dunn at 11:36 AM 2 comments:

For the planet Rann, James wanted the planet to be obviously alien and strange. I remember us talking about the skies in the 1980 movie "Flash Gordon". I went and re-watched the movie and noticed the clouds were made by filming different colored dyes being dropped into water and compositing it in optically. To replicate something like that would have involved animation and might have been too distracting anyway, so I came up with these skies instead.

"Batman: The Brave and the Bold" ™Warner Bros. Animation.
Posted by Bill Dunn at 11:35 AM No comments: 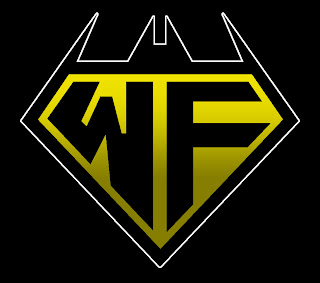 James Harvey at World's Finest recently interviewed me about the background paint production process on "Batman: The Brave and the Bold". Check out the Q & A here:

http://www.worldsfinestonline.com/WF/bravebold/backstage/interviews/wfdunn.php
Posted by Bill Dunn at 8:09 PM No comments:

B:TB&tB episode 13, a photo by William Joseph Dunn on Flickr.
This episode is the second half of the mid-season two parter. Part two also had it's share of Easter eggs, but I was surprised that nobody seemed to catch these three. In case you're wondering, these scenes were a nod to a certain 1960's show.

"Batman: The Brave and the Bold" ™Warner Bros. Animation.
Posted by Bill Dunn at 2:23 PM No comments:

The "Batman: The Brave and the Bold" Background Paint Blog


February 2011 marked my end of production for the "Batman: The Brave and the Bold" animated series. I started working on B:TB&tB as one of the background painters in 2008 and about eight episodes in, I became the background paint supervisor. I plan to use this blog to do a postmortem of sorts and show a small portion of the background paintings I did for the show. I will to try to post at least one painting from every one of the 65 episodes of the series and to have a little commentary to go along with the work. Also, I am going to show some work that was never used for the show for whatever reason. Updates will be once a week (probably on Monday) until we reach the end of the series.

One last note: even though I painted these backgrounds, all of the paintings here are property of Warner Bros Animation, so please do not post any of the work here on your website. You really don't want to upset WB's lawyers...like at all.

"Batman: The Brave and the Bold" ™ Warner Bros. Animation

Bill Dunn
Since 1997, I have been background painting for such studios as Disney, Warner Bros., Nickelodeon, and Sony Animation.